In healthcare approximately 70% of patient harm happens due to human factors. Human factors refer to environmental, organisational and work-related factors, and human and individual characteristics, which influence behaviour at work in a way which can affect health and safety (5). When an error occurs, it typically triggers a chain reaction. In most cases the problem is not the lack of medical knowledge. Problems lie in how knowledge transfers into practice, in complex situations, defects in environment, and problems in teamwork and communication. Most settings in healthcare require individuals to work in collaboration. Therefore, those who work together should also train together. The transition towards a modern and proactive safety culture includes the acknowledgement of the importance of education in Human Factors, and training in Crisis Resource Management (CRM) (2).

In Pelgulinna Simulation Centre we use simulation training (preferably in situ) in order to learn by doing. We train our teams of learners to work effectively as well as improve system safety. Each and every training situation should be debriefed first. The main purpose of a debriefing is to identify the reasons, causes and underlying factors for both poor and good practices and behaviour. We also debrief real patient situations to analyse and identify what was done well alongside the places of improvement. Patient situations with good performances should be discussed and analysed carefully in order to find out what exactly made them successful. Simulation and debriefing of actual patient cases after adverse events, or near misses are a powerful tools for teamwork, system improvements and individual team member’s empowerment after a difficult situation (4). 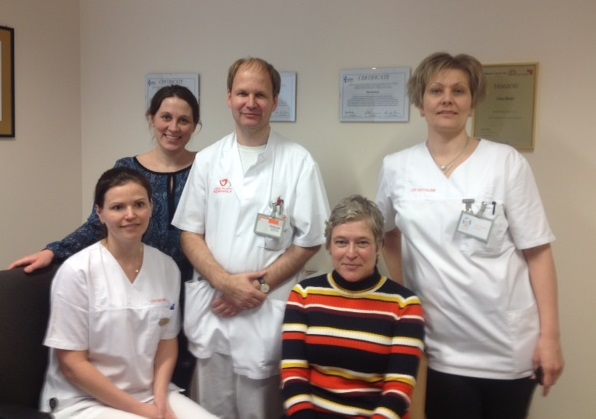 In Pelgulinna we reconstructed a real patient case for simulation training. In this case we applied Drama education methods to carry out the training.  We decided to put ”Stop and Go Method” to the test. Stop and Go Method originates from Forum theatre, originally developed by Augusto Boal. Boal created Forum theatre as a forum for teaching people how to change their world. The basic principle is that actors and audience members can stop a performance and suggest different actions in an attempt to change the outcome (1).

The method was applied to simulation training as follows: any of the trainees or instructors had the right to stop simulation at any time to discuss about what happened and what to do differently, to suggest developments, or just to slow down the pace of the situation. We carried out the simulation step by step and wrote down the observations to implement them. According to Rall,  one of the reasons errors occur in healthcare practices is the pace of the work: critical situations  tend to occur very quickly. To slow down, 10-seconds-for-10-minutes CRM-principle has emerged from more than ten years of experience in trying to enhance patient safety in acute care settings, especially in simulation team training for healthcare professionals (3). We believe that by using reconstruction with Stop and Go Method in simulation training we can increase the healthcare professionals` awareness of their actions during patient treatment and via that improve patient safety.

We were happy to have an opportunity to try this method in West Tallinn Central Hospital Women’s Clinic in Tallinn Estonia. Our team included paediatrician, two gynaecologists, one anaesthesiologist and two midwives. From our group of five instructors four were trained simulation instructors, and one was an instructor with drama education acquirements. Simulation began by explaining the ground rules of simulation, and briefing the objectives of both the training and the training method. We also made time for each team member to share their thoughts and personal learning objectives, if they had any. Debriefing was divided due to the Stop and Go Method and it was partly carried out during the simulation itself.

Our training session received positive feedback from the team. The possibility to implement developement ideas in practice was very rewarding to the trainees, as it enabled transferring knowledge efficiently and implement good practices to their daily work.

During the drama exercise we also gained new knowledge and understanding. These discoveries helped us to form a more detailed and wider picture of the patient situation and team performance in general. Despite of the team being familiar with the reconstructed patient case and each member being debriefied, each participator learned new things and remembered them afterwards in addition to those that had been already discussed earlier.

This kind of analysis can be conducted among the team, yet the assistance of a person with understanding of the method is required. A third party also may also offer more objective point of view  to the analysis, and expand the overall perspective.

The authors will publish a more detailed article about this method later this year. More information: